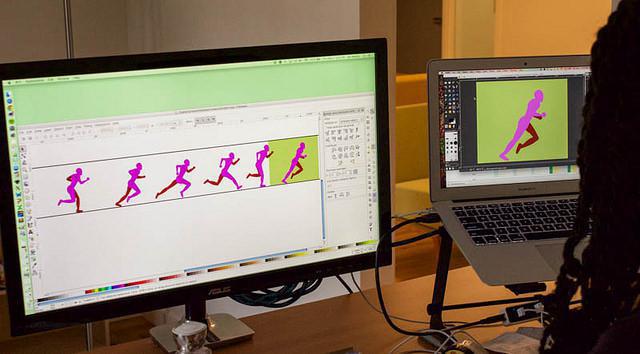 Last Friday everyone at Caktus set aside their regular client projects for our quarterly ShipIt Day, a chance for Caktus employees to take some time for personal development and independent projects. People work individually or in groups to flex their creativity, tackle interesting problems, or expand their personal knowledge. This quarter’s ShipIt Day saw everything from game development to Bokeh data visualization, Lego robots to superhero animation. Read more about the various projects from our Q2 2015 ShipIt Day.

Victor worked on our version of Ultimate Tic Tac Toe, a hit at PyCon 2015. He added in Jeff Bradbury’s artificial intelligence component. Now you can play against the computer! Victor also cleaned up the code and open sourced the project, now available here: github.com/caktus/ultimatetictactoe.

Philip dove into @total_ordering, a Python feature that fills in defining methods for sorting classes. Philip was curious as to why @total_ordering is necessary, and what might be the consequences of NOT using it. He discovered that though it is helpful in defining sorting classes, it is not as helpful as one would expect. In fact, rather than speeding things up, adding @total_ordering actually slows things down. But, he concluded, you should still use it to cover certain edge cases.

Karen updated our project template, the foundation for nearly all Caktus projects. The features she worked on will save us all a lot of time and daily annoyance. These included pulling DB from deployed environments, refreshing the staging environment from production, and more.

Erin explored Bokeh, a Python interactive data visualization library. She initially learned about building visualizations without javascript during PyCon (check out the video she recommended by Sarah Bird). She used Bokeh and the Google API to display data points on a map of Africa for potential use in one of our social impact projects.

Jeff B worked on Lisp implementation in Python. PyPy is written in a restricted version of Python (called RPython) and compiled down into highly efficient C or machine code. By implementing a toy version of Lisp on top of PyPy machinery, Jeff learned about how PyPy works.

Calvin and Colin built the beginnings of a live style guide into Caktus’ Django-project-template. The plan was loosely inspired by Mail Chimp's public style guide. They hope to eventually have a comprehensive guide of front-end elements to work with. Caktus will then be able to plug these elements in when building new client projects. This kind of design library should help things run smoothly between developers and the design team for front-end development.

Neil experimented with Mercury hoping the speed of the language would be a good addition to the Caktus toolkit. He then transitioned to building a project in Elm. He was able to develop some great looking hexagonal data visualizations. Most memorable was probably the final line of his presentation: “I was hoping to do more, but it turns out that teaching yourself a new programming language in six hours is really hard.” All Cakti developers nodded and smiled knowingly.

Caleb used Erlang and cowboy to build a small REST API. With more time, he hopes to provide a REST API that will provide geospatial searches for points of interest. This involves creating spatial indexes in Erlang’s built-in Mnesia database using geohashes.

Mark explored some of the issues raised in the Django-project-template and developed various fixes for them, including the way secrets are managed. Now anything that needs to be encrypted is encrypted with a public key generated when you bring up the SALT master. This fixes a very practical problem in the development workflow. He also developed a Django-project-template Heroku-style deploy, setting up a proof of concept project with a “git push” to deploy workflow.

Vinod took the time to read fellow developer Mark Lavin’s book Lightweight Django while I took up DRiVE by Daniel H. Pink to read about what motivates people to do good work or even complete rote tasks.

Edward and Lucas built a minigame for our Epic Allies app. It was a fun, multi-slot, pinball machine game built with Unity3D.

Hunter built an HTML5 game using Phaser.js. Though he didn’t have the time to make a fully fledged video game, he did develop a fun looking boardgame with different characters, abilities, and animations.

NC developed several animations depicting running and jumping to be used to animate the superheros in our Epic Allies app. She loved learning about human movement, how to create realistic animations, and outputting the files in ways that will be useful to the rest of the Epic Allies team.

Wray showed us an ongoing project of his: a front-end framework called sassless, “the smallest CSS framework available.” It consists of front-end elements that allow you to set up a page in fractions so that they stay in position when resizing a browser window (to a point) rather than the elements stacking. In other words, you can build a responsive layout with a very lightweight CSS framework.

One of the most enertaining projects of the day was the collaboration between Rebecca C and Rob, who programmed Lego-bots to dance in a synced routine using the Lego NXT software. Aside from being a lot of fun to watch robots (and coworkers) dance, the presence of programmable Lego-bots prompted a much welcome visit from Calvin’s son Caelan, who at age of 9 is already learning to code!