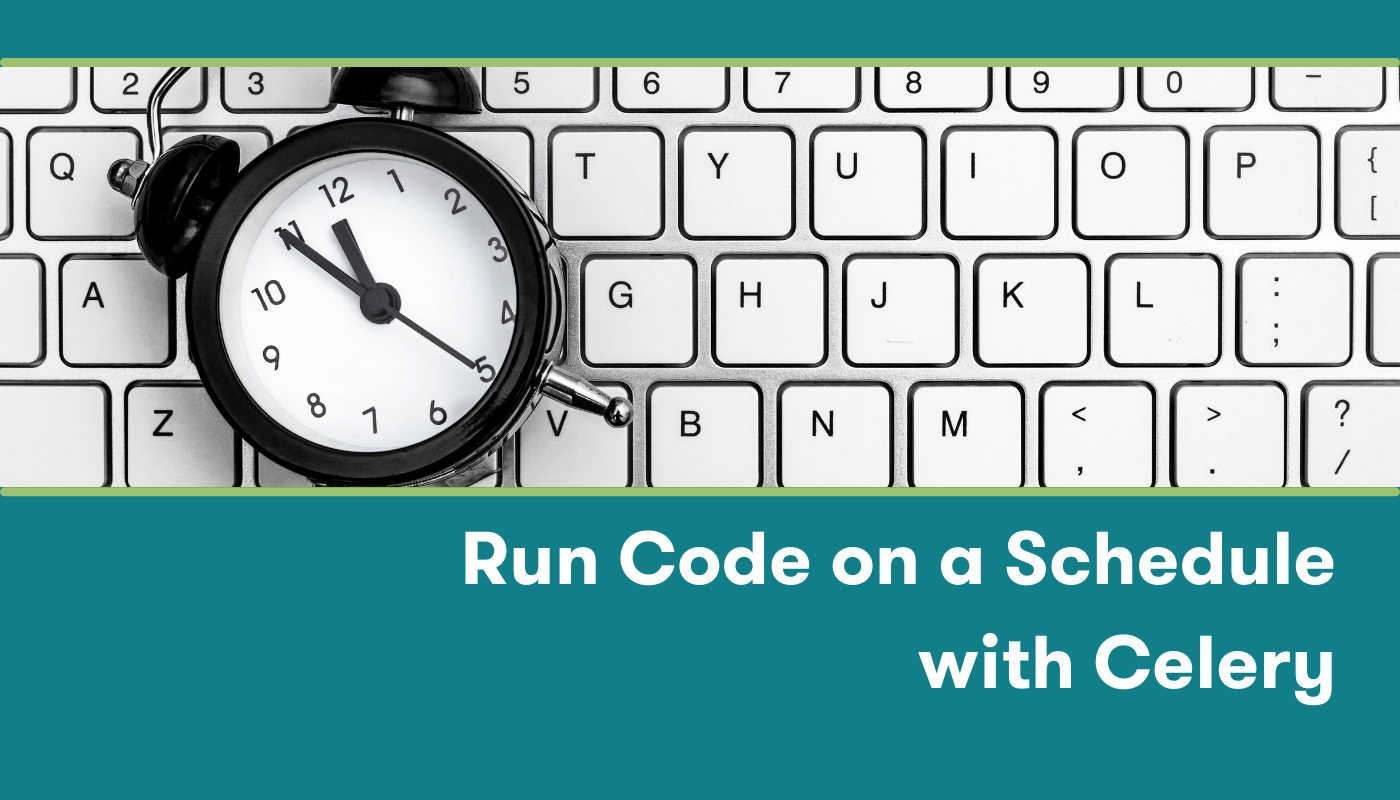 There are multiple ways to schedule tasks in your Django app, but there are some advantages to using Celery. It’s supported, scales well, and works nicely with Django. Given its wide use, there are also lots of resources for learning more about it, and once learned, that knowledge is likely to be useful on other projects.

By the way, this blog is an updated version of one I wrote in 2014 on the same topic, but it applied to Celery 3.0.x.

The purpose of Celery is to allow you to run code according to a schedule. Why might this be useful? Here are a couple of common cases:

Case 1: Suppose a web request has come in from a user, who is waiting for the request to complete so a new page can load in their browser. Based on their request, you have some code to run that's going to take a while (longer than the person might want to wait for a web page), but you don't really need to run that code before responding to the web request. You can use Celery to have your long-running code called later, and go ahead and respond immediately to the web request.

A task is just a Python function. You can think of scheduling a task as a time-delayed call to the function. For example, you might ask Celery to call your function task1 with arguments (1, 3, 3) after five minutes. Or you could have your function batchjob called every night at midnight.

When a task is ready to be run, Celery puts it on a queue, a list of tasks that are ready to be run. You can have many queues, but we'll assume a single queue here for simplicity.

Putting a task on a queue just adds it to a to-do list, so to speak. In order for the task to be executed, some other process, called a worker, has to be watching that queue for tasks. When it sees tasks on the queue, it'll pull off the first and execute it, then go back to wait for more. You can have many workers, possibly on many different servers, but we'll assume a single worker for now.

We'll talk more later about the queue, the workers, and another important process that we haven't mentioned yet, but that's enough for now.

(Aside: This was much simpler a few major releases of Celery ago, when we could just run Celery applications as Django management commands. Ah, those were the days ...)

Here are some key points:

We just need to get Celery configured to use with runserver. For the Celery broker, which lets Django and the Celery workers communicate, we'll use Redis. Redis is nice because it's both easy to set up and suitable for many production environments.

Warning: Before using Redis beyond just playing on your local system, read about Redis security and plan to protect your Redis server. It is not designed to be secure out-of-the-box.

In your Django settings file, add:

Note: The broker is the single most important configuration value, since it tells Django and Celery how to communicate. If they don't have the same value for this setting, no tasks will run.

We need a small Python file that will initialize Celery the way we want it, whether running in a Django or Celery process.

It's tempting to just create a file celery.py at the top level of our project, but that's exactly the name we cannot use, because Celery owns the celery package namespace. Instead, I'll create a celery.py inside one of my existing packages. In these examples, that will be myapp/celery.py.

Here's the code that you need to add:

It doesn't really matter what variable you assign the Celery() object to. Celery will find it as long as it's at the top level of the module.

For example, there's a Celery setting timezone. If we wanted to set that, we'd put something like this in our Django settings:

It is critical that this file is imported late in Django setup, after all your Django apps have been registered and models loaded. I recommend importing it inside any Django app's ready() method.

You'll see below that we'll tell Celery's processes to load this using a command-line option.

As mentioned before, a task can just be a Python function. However, Celery does need to know about it. That's pretty easy when using Celery with Django. Just add a tasks.py file to an application, put your tasks in that file, and decorate them using @shared_task(). Here's a trivial tasks.py:

Marking a function as a task doesn't prevent calling it normally. You can still call it: z = add(1, 2) and it will work exactly as before. Marking it as a task just gives you additional ways to call it.

When this is imported, Celery will register this method as a task for our application. Or calling app.autodiscover_tasks() will load the tasks in all your <appname>/tasks.py files.

All tasks must be imported during Django and Celery startup so that Celery knows about them. If we put them in <appname>/tasks.py files and call app.autodiscover_tasks(), that will do it. Or we could put our tasks in our models files, or import them from there, or import them from application ready methods.

Let's start with the simple case we mentioned above. We want to run our task soon. We just don't want it to hold up our current thread. We can do that by adding .delay to the name of our task:

Celery will add the task to its queue ("worker, please call myapp.tasks.add(2, 2)") and return immediately. As soon as an idle worker sees it at the head of the queue, the worker will remove it from the queue, then execute it, something like this:

A Warning About Import Names

It's important that your task is always imported and referred to using the same package name. For example, depending on how your Python path is set up, it might be possible to refer to it as either myproject.myapp.tasks.add or myapp.tasks.add. Or from myapp.views, you might import it as .tasks.add. But Celery has no way of knowing those are all the same task.

As already mentioned, a separate process, the worker, has to be running to actually execute your Celery tasks. Here's how we can start a worker for our development needs.

First, open a new shell or window. In that shell, set up the same Django development environment - activate your virtual environment, or add things to your Python path, whatever you do so that you could use runserver to run your project.

Also, even if you otherwise wouldn't, you must set DJANGO_SETTINGS_MODULE in your environment, or Celery won't recognize that it's running with Django.

Now you can start a worker in that shell:

The worker will run in that window, and send output there.

The -A command line "option" isn't really optional. Celery will import that module and look for our Celery application object there.

By the way, we can be more specific here, e.g. -A myapp.celery:app to tell Celery that the application we want it to use is in the app top-level variable in the module. But you wouldn't have to do that unless you had multiple Celery applications in the module, and there's no reason to do that for most Django projects.

Back in your first window, start a Django shell and run your task:

You should see output in the worker window indicating that the worker has run the task:

If instead, things seem to hang, go back and make sure the Django app has the changes suggested above to settings, myapp/__init__.py, and myapp/apps.py.

Earlier we mentioned using Celery to avoid delaying responding to a web request. Here's a simplified Django view that uses that technique:

It can be frustrating to get Celery tasks working, because multiple parts have to be present and properly communicating with each other. Many of the usual tips still apply:

There are also some tools that are unique to Celery.

In your Django settings, you can add:

and Celery will bypass the entire scheduling mechanism and call your code directly.

In other words, with CELERY_ALWAYS_EAGER = True, these two statements run just the same:

You can use this to get your core logic working before introducing the complication of Celery scheduling.

Anytime you schedule a task, Celery returns an AsyncResult object. You can save that object, and then use it later to see if the task has been executed, whether it was successful, and what the result was.

Another common case is running a task on a regular schedule. Celery implements this using another process, celery beat. Celery beat runs continually, and whenever it's time for a scheduled task to run, celery beat queues it for execution.

For obvious reasons, only one celery beat process should be running (unlike workers, where you can run as many as you want and need).

Starting celery beat is similar to starting a worker. Start another window, set up your Django environment, then:

Note: If you are running celery beat somewhere that it won't have a persistent file system across invocations, like in a container, then ignore the following instructions and see my other blog post: How to Schedule Tasks Using Celery Beat in a Container.

To arrange for the "add" task in the "myapp.tasks" package to run every 30 seconds with arguments (16, 16), add this to your Django settings:

For safety's sake, the expires option tells Celery that if it's not able to run this task within 15 seconds, to just cancel it. We know we'll queue another one every 30 seconds anyway.

Don't pass model objects to tasks. Since tasks don't run immediately, by the time a task runs and looks at a model object that was passed to it, the corresponding record in the database might have changed. If the task then does something to the model object and saves it, those changes in the database are overwritten by older data.

It's almost always safer to save the object, pass the record's key, and look up the object again in the task:

Schedule tasks in other tasks. It's perfectly all right to schedule one task while executing another. This is a good way to make sure the second task doesn't run until the first task has done some necessary work first.

Don't wait for one task in another. If a task waits for another task, the first task's worker is blocked and cannot do any more work until the wait finishes. This is likely to lead to a deadlock, sooner or later.

If you're in Task A and want to schedule Task B, and after Task B completes, do some more work, it's better to create a Task C to do that work, and have Task B schedule Task C when it's done.

Once you understand the basics, parts of the Celery User's Guide are good reading. I recommend the following chapters to start with; the others are either not relevant to Django users or are more advanced:

For information on this topic, check out my other blog post, Celery in Production.

That’s it! We hope you enjoy learning new ways to do scheduling in Celery. We look forward to hearing your comments!