Getting Started Scheduling Tasks with Celery 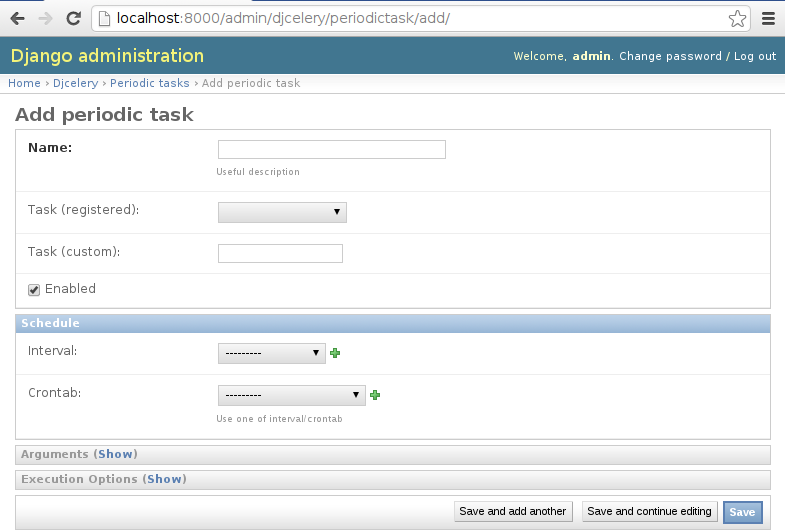 UPDATE: A newer version of this blog post is available for Celery Version 5.0.x.

Many Django applications can make good use of being able to schedule work, either periodically or just not blocking the request thread.

There are multiple ways to schedule tasks in your Django app, but there are some advantages to using Celery. It’s supported, scales well, and works well with Django. Given its wide use, there are lots of resources to help learn and use it. And once learned, that knowledge is likely to be useful on other projects.

This documentation applies to Celery 3.0.x. Earlier or later versions of Celery might behave differently.

The purpose of Celery is to allow you to run some code later, or regularly according to a schedule.

Why might this be useful? Here are a couple of common cases.

First, suppose a web request has come in from a user, who is waiting for the request to complete so a new page can load in their browser. Based on their request, you have some code to run that's going to take a while (longer than the person might want to wait for a web page), but you don't really need to run that code before responding to the web request. You can use Celery to have your long-running code called later, and go ahead and respond immediately to the web request.

A task is just a Python function. You can think of scheduling a task as a time-delayed call to the function. For example, you might ask Celery to call your function task1 with arguments (1, 3, 3) after five minutes. Or you could have your function batchjob called every night at midnight.

We'll set up Celery so that your tasks run in pretty much the same environment as the rest of your application's code, so they can access the same database and Django settings. There are a few differences to keep in mind, but we'll cover those later.

When a task is ready to be run, Celery puts it on a queue, a list of tasks that are ready to be run. You can have many queues, but we'll assume a single queue here for simplicity.

Putting a task on a queue just adds it to a to-do list, so to speak. In order for the task to be executed, some other process, called a worker, has to be watching that queue for tasks. When it sees tasks on the queue, it'll pull off the first and execute it, then go back to wait for more. You can have many workers, possibly on many different servers, but we'll assume a single worker for now.

We'll talk more later about the queue, the workers, and another important process that we haven't mentioned yet, but that's enough for now, let's do some work.

Installing celery for local use with Django is trivial - just install django-celery:

To get started, we'll just get Celery configured to use with runserver. For the Celery broker, which we will explain more about later, we'll use a Django database broker implementation. For now, you just need to know that Celery needs a broker and we can get by using Django itself during development (but you must use something more robust and better performing in production).

In your Django settings.py file:

The first two lines are always needed. Line 3 configures Celery to use its Django broker.

Important: Never use the Django broker in production. We are only using it here to save time in this tutorial. In production you'll want to use RabbitMQ, or maybe Redis.

djcelery is always needed. kombu.transport.django is the Django-based broker, for use mainly during development.

As mentioned before, a task can just be a Python function. However, Celery does need to know about it. That's pretty easy when using Celery with Django. Just add a tasks.py file to your application, put your tasks in that file, and decorate them. Here's a trivial tasks.py:

When djcelery.setup_loader() runs from your settings file, Celery will look through your INSTALLED_APPS for tasks.py modules, find the functions marked as tasks, and register them for use as tasks.

Marking a function as a task doesn't prevent calling it normally. You can still call it: z = add(1, 2) and it will work exactly as before. Marking it as a task just gives you additional ways to call it.

Let's start with the simple case we mentioned above. We want to run our task soon, we just don't want it to hold up our current thread. We can do that by just adding .delay to the name of our task:

Celery will add the task to its queue ("worker, please call myapp.tasks.add(2, 2)") and return immediately. As soon as an idle worker sees it at the head of the queue, the worker will remove it from the queue, then execute it:

A warning about import names

It's important that your task is always imported and refered to using the same package name. For example, depending on how your Python path is set up, it might be possible to refer to it as either myproject.myapp.tasks.add or myapp.tasks.add. Or from myapp.views, you might import it as .tasks.add. But Celery has no way of knowing those are all the same task.

djcelery.setup_loader() will register your task using the package name of your app in INSTALLED_APPS, plus .tasks.functionname. Be sure when you schedule your task, you also import it using that same name, or very confusing bugs can occur.

As we've already mentioned, a separate process, the worker, has to be running to actually execute your Celery tasks. Here's how we can start a worker for our development needs.

First, open a new shell or window. In that shell, set up the same Django development environment - activate your virtual environment, or add things to your Python path, whatever you do so that you could use runserver to run your project.

Now you can start a worker in that shell:

The worker will run in that window, and send output there.

Back in your first window, start a Django shell and run your task:

You should see output in the worker window indicating that the worker has run the task:

Earlier we mentioned using Celery to avoid delaying responding to a web request. Here's a simplified Django view that uses that technique:

It can be frustrating trying to get Celery tasks working, because multiple parts have to be present and communicating with each other. Many of the usual tips still apply:

There are also some tools that are unique to Celery.

In your Django settings, you can add:

and Celery will bypass the entire scheduling mechanism and call your code directly.

In other words, with CELERY_ALWAYS_EAGER = True, these two statements run just the same:

You can use this to get your core logic working before introducing the complication of Celery scheduling.

Peek at the Queue

As long as you're using Django itself as your broker for development, your queue is stored in a Django database. That means you can look at it easily. Add a few lines to admin.py in your application:

Now you can go to /admin/django/message/ to see if there are items on the queue. Each message is a request from Celery for a worker to run a task. The contents of the message are rather inscrutable, but just knowing if your task got queued can sometimes be useful. The messages tend to stay in the database, so seeing a lot of messages there doesn't mean your tasks aren't getting executed.

Anytime you schedule a task, Celery returns an AsyncResult object. You can save that object, and then use it later to see if the task has been executed, whether it was successful, and what the result was.

Another common case is running a task on a regular schedule. Celery implements this using another process, celerybeat. Celerybeat runs continually, and whenever it's time for a scheduled task to run, celerybeat queues it for execution.

For obvious reasons, only one celerybeat process should be running (unlike workers, where you can run as many as you want and need).

Starting celerybeat is similar to starting a worker. Start another window, set up your Django environment, then:

There are several ways to tell celery to run a task on a schedule. We're going to look at storing the schedules in a Django database table. This allows you to easily change the schedules, even while Django and Celery are running.

You can now add schedules by opening the Django admin and going to /admin/djcelery/periodictask/. See the image above for what adding a new periodic task looks like, and here's how the fields are used:

If you want some of your tasks to have default schedules, and not have to rely on someone setting them up in the database after installing your app, you can use Django fixtures to provide your schedules as initial data for your app.

Since tasks don't run immediately, by the time a task runs and looks at a model object that was passed to it, the corresponding record in the database might have changed. If the task then does something to the model object and saves it, those changes in the database are overwritten by older data.

It's almost always safer to save the object, pass the record's key, and look up the object again in the task:

Schedule tasks in other tasks

It's perfectly all right to schedule one task while executing another. This is a good way to make sure the second task doesn't run until the first task has done some necessary work first.

Don't wait for one task in another

If a task waits for another task, the first task's worker is blocked and cannot do any more work until the wait finishes. This is likely to lead to a deadlock, sooner or later.

If you're in Task A and want to schedule Task B, and after Task B completes, do some more work, it's better to create a Task C to do that work, and have Task B schedule Task C when it's done.

Once you understand the basics, parts of the Celery User's Guide are good reading. I recommend these chapters to start with; the others are either not relevant to Django users or more advanced:

The Celery configuration described here is for convenience in development, and should never be used in production.

The most important change to make in production is to stop using kombu.transport.django as the broker, and switch to RabbitMQ or something equivalent that is robust and scalable.