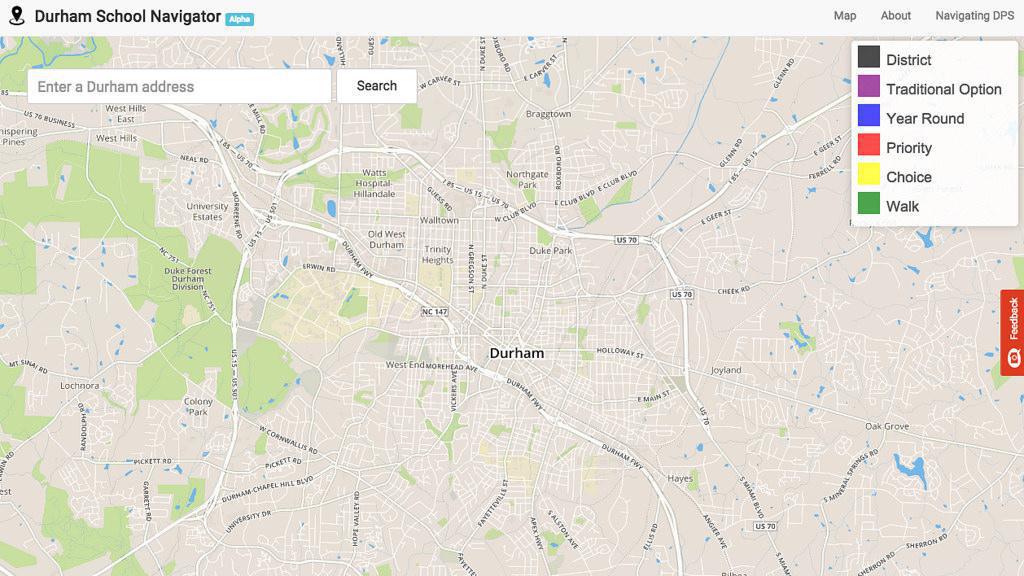 Members of one team joined forces with local meetup Code for Durham to help with the alpha launch of the School Navigator App. Using publicly available data, the School Navigator, allows users to geolocate nearby Durham schools and view information like performance ratings. The team included Code for Durham co-founder Colin Copeland who upgraded the Django template for the latest version of SALT. Erin Mullaney helped expand a feature denoting different school zones on the map, using Angular for the first time to do so. She also worked on a query change to more closely match the rules of districting on the map’s display. [Victor Rocha] developed various bug fixes, and merged pull requests. In the meantime, David Ray put his new Ionic skills to the test by building a mobile app version of the School Navigator, now available from the Google App store. (David’s starting Ship It Day project was working through an Ionic tutorial to create a Reddit viewing app with pull refresh and infinite scrolling.)

Mark Lavin, Rebecca Conley, Dmitriy Chukhin, and Ben Phillips built a Taylor Swift song generator that uses her lyrics to create new songs. Not only can you create new songs out of beloved Swift lyrics, but you can save your favorites to reference later. The app was built using a library called Markovify to create a Markov chain model. This model analyzes a body of text to determine probabilities of word occurrence. This then allows the app to generate next words based on these probabilities. The team even designed a cheeky 404 error page. Readers, I now encourage you to break the internet.

Rob Lineberger also had music on the brain. He developed the A-Ching app (based on the Ancient Chinese I-Ching) to disperse advice based on ABBA lyrics. To achieve this, Rob wrote a management command that used Beautiful Soup to parse an open source lyrics site. He then sorted the data by verses and programmed the app to produce a random call-up. Users can ask a question and the app will provide them with the answer in the form of the inimitable wisdom of the 1970s Swedish pop group. Having just finished coaching the Django Girls RDU workshop, Rob followed the Django Girls Tutorial to deploy his site, in order to further familiarize himself with the tutorial and to better coach for our next Django Girls RDU workshop.

Dan Poirier, Jeff Bradberry, and Scott Morningstar fleshed out Tequila, our Ansible alternative to SALT. Dan worked on getting the Caktus Group Django project template to deploy through Tequila in place of SALT. Now our developers can choose to deploy on Salt or Ansible. Though this transition is still a work in progress and in its testing phases, the team made a good step forward.

Rebecca Muraya spent her day importing her expense tracking data from Google Sheets to Django in an attempt to allow more complex analysis across multiple years. She hit a lot of bumps along the road but made significant headway in transferring the data.

Karen Tracey looked into using Django’s new HStoreField for a client project involving surveys. In these surveys information pulled from the roster for the individual survey-taker can be used to personalize the survey, and over time various fixed roster fields have been added to access different information about the survey-taker. Each of these additions has required code changes to support these new roster fields, many of which are used only very rarely. Though she didn’t get beyond messing with roster import code, she was heartened to find that the experiment worked, and could enable our client to add in extra roster fields at their own discretion.

Tobias McNulty spent the day testing a base operating system and Postgres database upgrade for a client project. He found the base image could be switched from Ubuntu 12.04 to 14.04 with few other changes. The Postgres upgrade was more difficult to automate because cluster file formats change between major releases. Rather than upgrade the cluster directly, he found it easier to use the project’s existing feature to backup the database from Postgres 9.1 and restore it to a new server running Postgres 9.4. When load testing the performance before and after the Postgres upgrade, he found little to no difference for this app.

Our Project Management team, Ben Riesling, Sarah Gray, Daryl Riethof, and [Katie Twilley] reevaluated their weekly reporting methods and developed a series of questions to help them create a new format for these reports.

Though Hunter MacDermut and Calvin Spealman were both out of the office for the day, they couldn’t help but participate in ShipIt Day from afar. Hunter explored the vast world of geolocation. Using a browser-based HTML geolocation API, he built a simple compass. Usable on any device with built-in GPS, you can open it on your smartphone to see the compass in action. The source code can be found on Github. Calvin attempted prototyping a CSS framework based on Flexbox rules with mixed results.

Nicole Foster and Liza Chabot were able to break away from their duties for a few hours to get some reading done. Nicole read a few articles from The Harvard Business Review’s 10 Must-Reads on Managing People. Liza read ”Hello World!”: The History of Programming and started on Charles Petzold’s Code: The Hidden Language of Computer Hardware and Software.