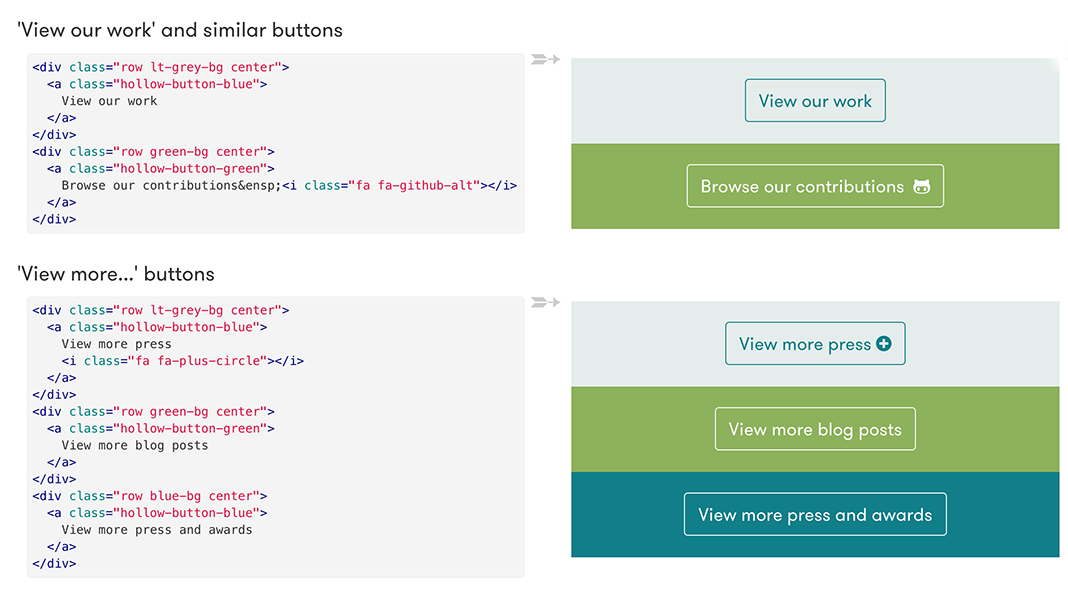 What is it like to be an intern at Caktus? I am finishing up as the spring Django intern (though I didn't actually use any Django), so I'll share my experience.

What brought me to this point

As a long-time stay-at-home mom re-entering the workforce, I was apprehensive about how my lack of recent professional work experience and references would affect my job search. To update my skillset, I completed the intensive 12-week Python course at The Iron Yard. I was hoping to find work in the tech industry I had left behind before having three children.

I was fortunate to be offered a 12-week part-time internship at Caktus. On my application and in my interview, I had expressed an interest in exploring HTML and CSS in more depth than I had had a chance to do at The Iron Yard. And that is how I have spent the majority of my time here. My first task was to implement a style guide for the Caktus website. A generic style guide existed but needed to be customized to reflect the Caktus website.

What is a style guide?

What I did as an intern

I spent some time studying up on HTML, LESS, and CSS. Then Calvin, Caktus’ lead front-end developer, helped me get started by introducing me to the style guide in its generic form, and walking me through what needed to be done by styling a button from the Caktus website.

I began exploring the website to find what needed to be styled. I dove into the code to see what made things tick, and where the differences were between elements that had a similar style. The goal was to replicate them in the style guide so that anyone adding a button or card to the website would have the code at their fingertips, creating uniformity across the website and making their job faster and easier.

The style guide ended up including buttons, blog, press and case study cards and the fields from the Contact Caktus form. Some things were pretty quick and easy once I learned my way around. For example, I had known about the capability to inspect an element but didn’t know how to use the information found there. I learned a lot about classes and how HTML and CSS/LESS work together. This was more like a logic puzzle than work!

When I finished the style guide, my team was at the end of a sprint, and I asked for something to do in the short time before the next sprint started. It was a natural progression for me to use JIRA, Caktus’ issue and project tracking system, to log the bugs and inconsistencies I had come across during my travels through the Caktus website for the style guide project. Since I have volunteered over the years as an editor for various newsletters, inconsistencies pop out at me, and it was gratifying to log them.

My next assignment took me from working on an internal document to doing things that would show up in the real world.

I fixed several different bugs and issues with the website, but one of the most challenging was to fix links that were not working appropriately and/or consistently. Some didn’t underline when hovered over. Some underlined twice. A few returned a 404. None of the external links opened in a new tab or window. Links within the text of a blog, press release or case study had not been treated consistently.

Again, it was more like a game or a logic puzzle to fix these.

What I took away

As someone who had been out of the professional workforce for years, simply being in a more modern tech environment was educational - tools such as the issue tracking system, Agile methods, and even the chance to use Github in a real work environment were new for me. My co-workers, especially Karen, Erin, Calvin and Dmitriy never assumed that I didn’t know something, but also never assumed that I did. They checked up on me to make sure my internship was what I wanted it to be. The environment truly supported someone just starting a coding career.

I received a full-time offer from Blackboard and have to leave the internship after only nine weeks, which is both good and bad news. This internship opportunity is rare and valuable; Caktus simply wants to help junior-level programmers gain skills in a supportive environment which will make them better prepared to make real contributions in the workforce. I feel like I was really getting my feet under me, and the last 3 weeks would have been explosive in what I would learn. Still, I can’t say enough about how glad I am to have been chosen for this internship.

What Web Analytics Can’t Tell You About User Experience