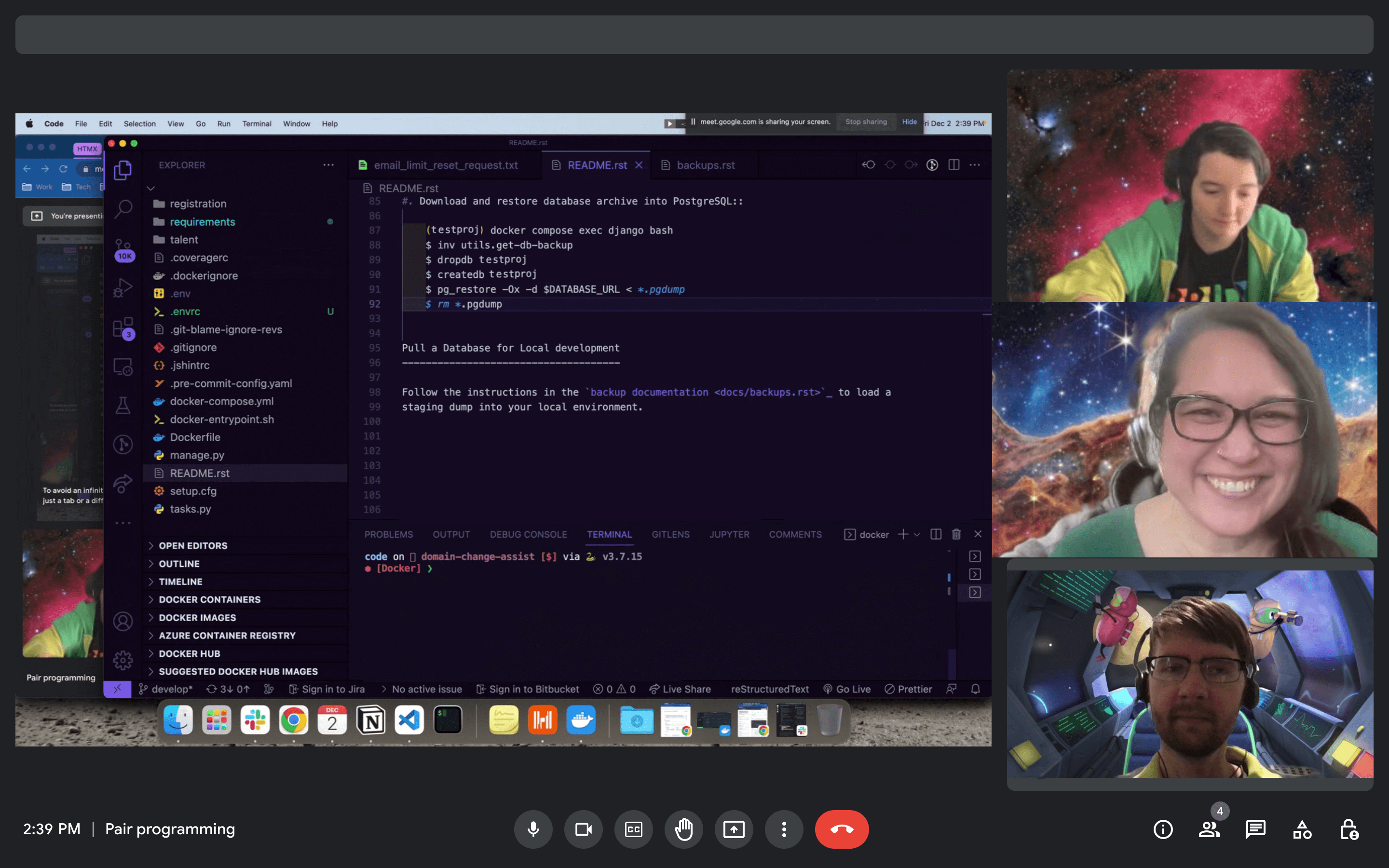 While traditional hiring has been an important path to employment at Caktus, we also wanted to create a different path for folks who didn’t yet have the necessary training to apply for a full-time job. We also wanted to participate more in their training, so that they are better prepared for a role at Caktus, should they choose to work here. As such, we created an apprenticeship, a fellowship, and a mentorship program, to help newer developers grow.

Our fellowship program is meant for people who are looking for training prior to beginning a career in web development. By supporting their education at a coding school and then accelerating the time it takes to acclimate to a professional environment, we begin a relationship that aims to support fellows to enter the workforce as prepared developers, whether at Caktus or elsewhere. Since beginning our fellowship program at the end of 2021, it has been rewarding to see several fellows learn skills at a coding school, and then be able to translate them into professional work on projects at Caktus. Having worked with several of the fellows, I’m excited to see them continue to grow as full-time developers on our team in the coming year.

One final aspect of our focus on growth at Caktus is a new mentorship program for high school students. With the goal of being introduced to different aspects of web development at Caktus, several high school students meet with a Caktus developer throughout the year, practice coding, and learn about different roles at Caktus. It has been interesting to work with the high schoolers, to answer their questions, to point them in the direction of what they’re interested in learning about, and to watch our team culture change to include more opportunities for explanation about processes and technologies.

All of these changes have taken a significant amount of time, in terms of deciding, planning, coordinating, and answering questions, but I believe that the effort has been beneficial, both to more junior folks, and to others on our team. Besides having several new team members who were ready to participate in their work from their first day, one thing that has become visible is the benefit of an explicit space for asking questions and learning. This explicit space has looked different in different settings (a one-on-one meeting, a team meeting, a time for lightning talks, etc.), but has contributed to learning for everyone on our team. We have also found that helping others grow has been a rewarding experience, both personally and for the company, and is an extension of our core values. As Caktus continues to grow sharp web apps, we hope that these changes provide a way for people to grow in their careers, and to help those around them to grow too.

Looking for more concrete details about our apprenticeship, fellowship, and mentorship programs? Stay tuned for the next post about mentorship at Caktus.