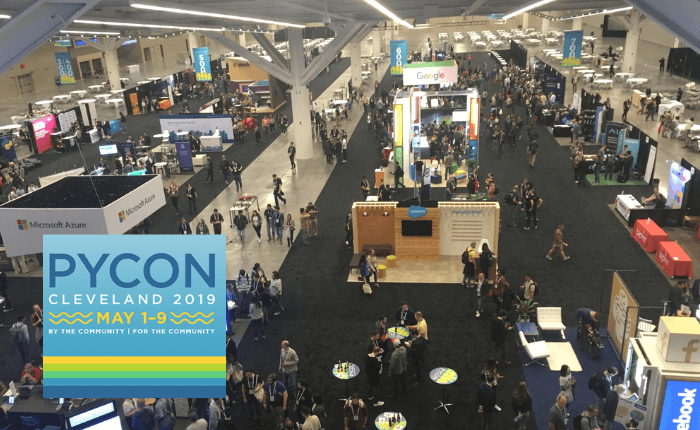 Above: A view of the busy exhibit hall. Photo copyright © 2019 by Sean Harrison. All rights reserved.

PyCon 2019 attracted 3,393 attendees, including a group of six Cakti. When we weren’t networking with attendees at our booth, we attended some fascinating presentations. Below are some of our favorites. You can watch these talks and more on the PyCon 2019 YouTube channel.

One tutorial and one talk stood out as my favorites.

I attended four tutorials and this was the last one on Thursday. Each tutorial is hands-on and lasts about three hours. By far, this was my favorite, primarily due to the exercise-based format. Kevin Markham was well organized and a great teacher, most likely because he runs Data School, which I discovered is in Asheville! The tutorial centered around analyzing the TED Talks dataset from Kaggle. Kevin live-coded each lesson, demonstrating best practices for slicing and analyzing the dataset with Pandas. Then he turned it over to us, providing several possible exercises with increasing levels of difficulty, which utilized the tools he just taught. I found the in-person exercises valuable as they made us practice the techniques right then, and therefore, learn through experience. I overbooked myself with four tutorials and didn’t have enough time to practice what I learned in all of them, so I felt like I got the most out of Kevin’s format, and I look forward to future tutorials with him. The full video of the tutorial is below, or you can view a condensed version.

Plan your next eclipse viewing with Jupyter and geopandas

This was the first talk I attended. I was excited to learn about using maps in Jupyter Notebooks, as I hadn’t had the chance to do so yet. Christy Heaton’s talk was very accessible with an easy to follow hypothetical question of: In what cities will we be able to see upcoming solar eclipses? After starting with a brief intro on eclipses, spatial data, and coordinate systems, she walked through a Jupyter Notebook, demonstrating the ease of mapping data in a notebook with geopandas. Eventually piecing together cities, eclipse paths, and years to show which cities would be best for viewing the 2024 eclipse over the U.S. I learned a lot from this talk, especially how easy it is to use matplotlib to visualize DataFrames with geometries. It’s great to see how notebooks can be used to easily explore spatial data with Pandas and Geopandas.

There was one PyCon talk that rose to the top for me.

Sarah Withee spoke from the heart on this topic. She described the OpenAPS (open artificial pancreas system) which was created from an open source project that also involved hardware. It combines glucose monitors and insulin pumps to automatically manage insulin levels for those with type 1 diabetes. It was a project that the medical device companies didn’t want to take on because they didn’t think it’d be profitable. So Sarah and others took the matter into their own hands. From the talk, I learned a lot about how the pumps work and interact with each other and I saw how life-changing it is. Sarah is an adopter of the device, and she spoke about how her blood sugar levels went from being all over the place to being much more stable. The project really speaks to the power of people and open source. Now, the medical device companies are finally trying to incorporate it into their devices.

My top 3 picks this year included the following:

Shannon Zhu from Instagram provided an informative overview of how Instagram has used type hints with the Pyre library to improve the security of millions of lines of Python. Type hints are a new area for me. This talk convinced me that starting to use them would be beneficial — not for improving performance, because they aren’t (yet?) used for that, but for the sake of validating the software’s interface security, particularly in terms of ensuring that “taints” from user input are “cleaned” before they are used.

Put down the deep learning: When not to use neural networks and what to do instead

Rachael Tatman from Kaggle gave an excellent overview of the different techniques of data science and encouraged people not to use deep learning until they know they need it. Machine learning has been and still is all the rage, and there were a lot of data scientists at PyCon. But I was glad to see some of the more traditional statistical methods being promoted alongside the newer ones.

Async was half the buzz at PyCon this year (the other half was machine learning), but a lot of places aren’t using asyncio very much yet. That’s one of the reasons I really liked this talk — not only did Neil Chazin, from Agari, give an accessible intro/overview to async programming, but he helped answer one of the key questions, which is “How do I write tests for it?” Watch his talk for the answer: