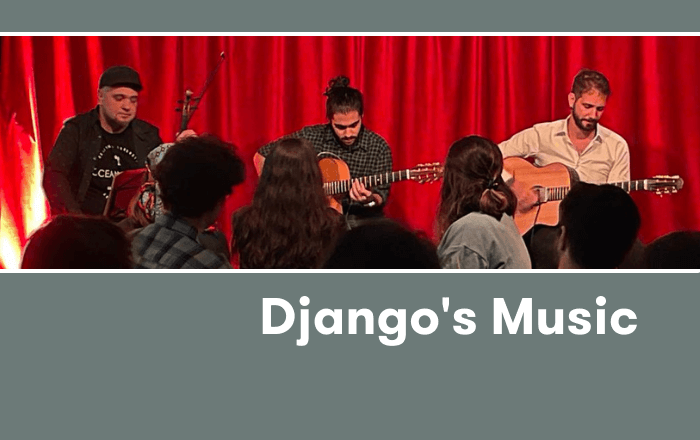 In early November, my husband and I celebrated a friend’s birthday with dinner and a show. The birthday boy has eclectic tastes and it’s always a treat to be included in his plans. Little did I know, however, that our night out in Berlin, Germany, would be related to my day job with Caktus, which is of course, based in Durham, North Carolina ... As a side note, I’ve been working remotely from Berlin since August 2021.

Our group showed up at 800A Bar & Cabaret a bit late, so the music had already started. Onstage were guitarists Filippo Dall'Asta and Francisco Batista, plus Sebastian Peszko on the viola. The music seemed familiar but I couldn’t quite place it until my husband realized it was similar to the original theme from the TV show “Monk”! The musicians were incredibly talented and we had a very enjoyable evening listening to them as well as the jam session later featuring various local artists.

Though I was unfamiliar with this style of music, I was familiar with the name Django Reinhardt as I had read a little about him when I first started working at Caktus.

When I saw his name on the e-ticket for the event, I connected the dots, and then impressed the techies in our group with the fun fact that the Django framework was named for him.

One of the Django creators, Adrian Holovaty, who is also a musician, is a big Reinhardt fan. However, that and Reinhardt’s Romani heritage were about the only things I knew about him. So I looked up some more info on him.

Reinhardt’s story is a fascinating one. He was born into a group — the Romani — that had been persecuted for generations and then he managed to survive living in Nazi-occupied France during World War II. Despite an injury to his hand and discrimination against him, he became one of the most well-respected and influential guitarists of all time.

I certainly can’t do his legacy justice in a brief blog post, so I encourage you to learn more about him on your own. If nothing else, listen to some of his recordings or do a search for him on YouTube to see him in action. Also, the Django’s Music musicians I saw all have video and audio clips and even free downloads. Who knows, maybe you’ll discover a live show in your area. Here’s hoping you find this style of music as delightful as we did. Let us know in the comments if it’s good music to listen to while writing code!