Letting Go of JIRA: One Team's Experiment With a Physical Sprint Board

At Caktus, each team works on multiple client-service projects at once, and it’s sometimes challenging to adapt different clients’ various tools and workflows into a single Scrum team’s process.

One of our Scrum teams struggled with their digital issue tracker; we use JIRA to track most of our projects, including the all-important sprint board feature. However, one client used their own custom issue tracker, and it was not feasible to transfer everything to our JIRA instance. A challenge then arose: how do we visualize the work we are doing for this project on our own sprint board?

We stick with JIRA

Since the tasks were already tracked in the client’s tracker, we did not want to duplicate that effort in JIRA, and we were unable to find an existing app to integrate the two trackers so that the data would sync both ways. But we still wanted the work to be represented in our sprints since it took up a significant portion of the team’s time.

Initially, we included placeholder JIRA tickets in our sprint for each person who would work on this project. Those tickets were assigned story points relative to the time that person was planning to spend on it. Essentially, among our other projects’ tasks and stories, we also had distinct blocks of hours to represent the work being done on this separate project.

This solution started to cause some confusion when the team tried to relate story points directly to hours, and it didn’t add any real value since the placeholder tickets lacked any specificity, so we decided to stop using them altogether. As a result, this project was not represented at all on our sprint board or in our velocity, and we did not have a good overall picture of our sprint work. This hindered our transparency and visibility into the team’s workload, and hurt our ability to allocate time across projects effectively (take a look at this post to see how we do that using tokens!).

We transition to a low-tech solution

Eventually, the team left JIRA behind and started using a physical whiteboard in the team room to visualize sprint work. The board allowed us to include tickets from our tracker and our client’s tracker in one central location. 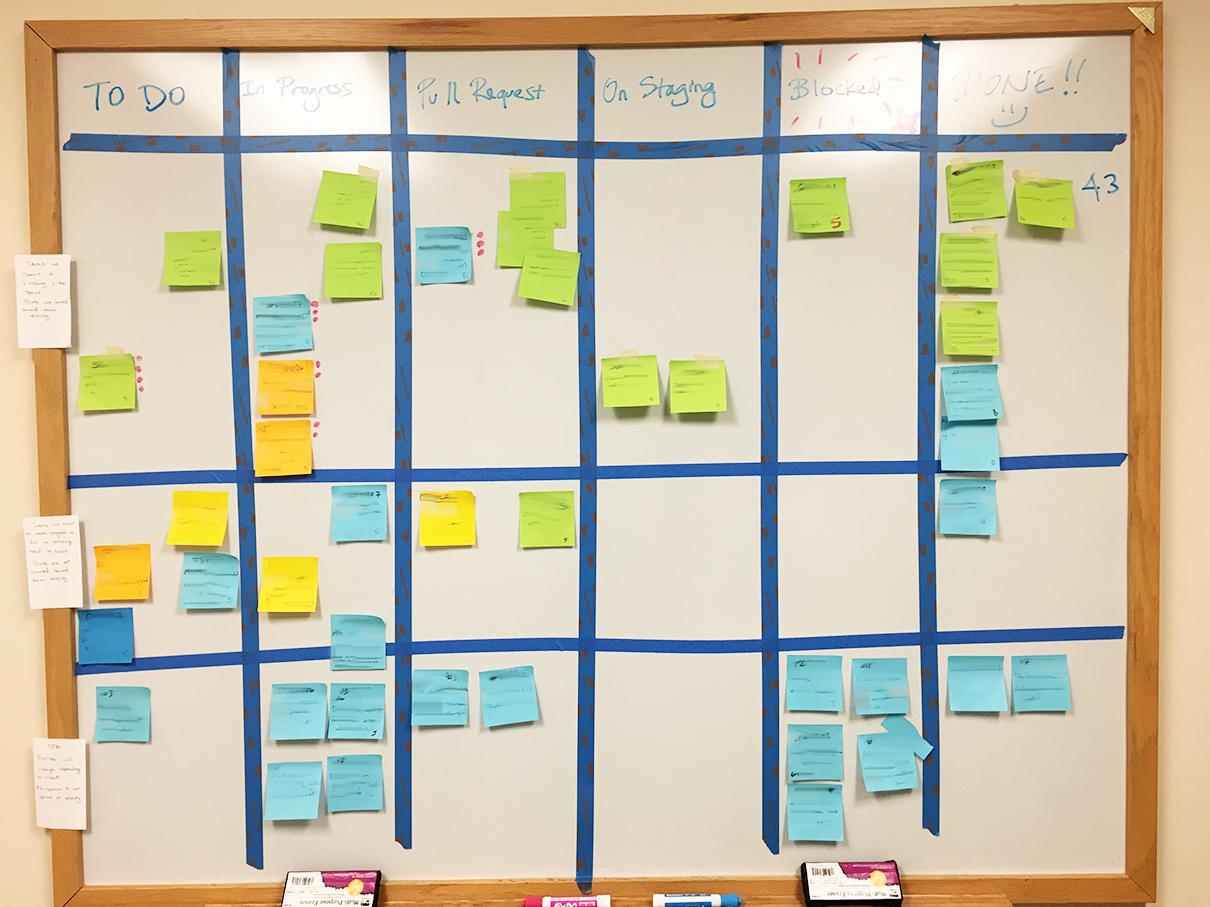 We divided the board into the same columns that were on our JIRA sprint board to represent ticket status: To Do, In Progress, Pull Request, On Staging, Blocked, and Done. We use sticky notes to represent each user story, task, or bug, color-coded by project. Each sticky contains a ticket number that maps to the ticket in one of the trackers, a short title or description, and a story point estimate. We also started tracking sprint burndown and team velocity on large sticky sheets, also posted on the walls of the team room. 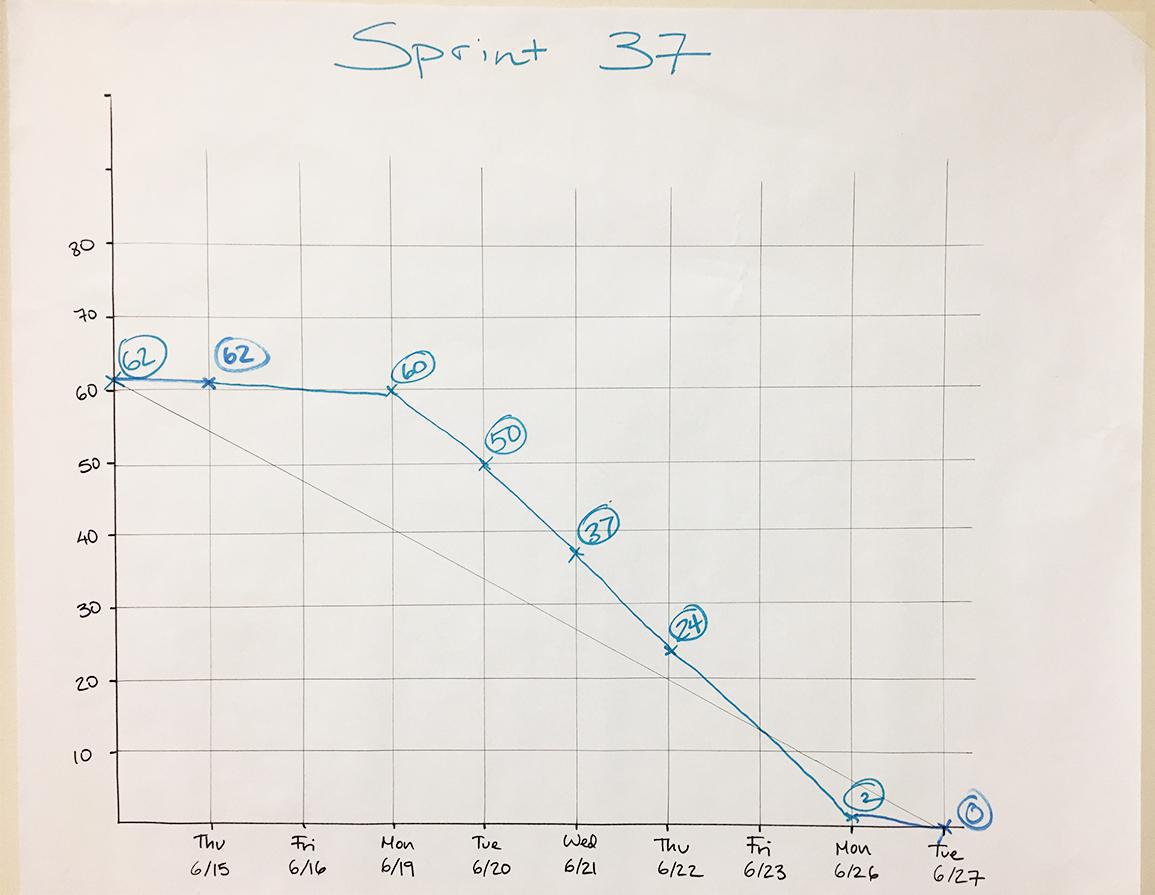 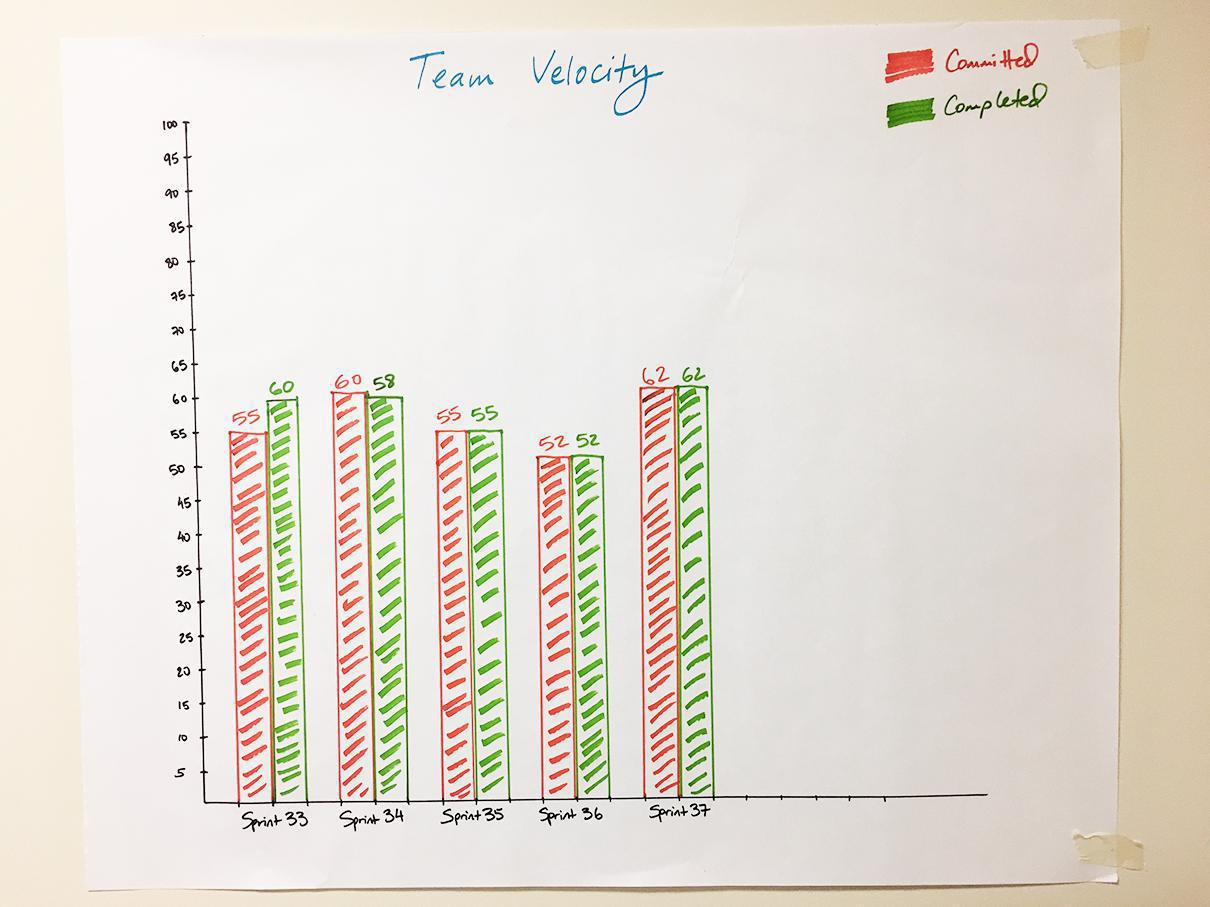 The physical board evolves

Including distinct tickets from the project in our sprints highlighted another challenge: the project’s priorities were determined by the client instead of by the team’s Product Owner, and the client did not use Scrum. This meant that the client changed the current priorities more frequently than our two-week sprint cadence, and the nature of the project was such that we had to keep up.

The team pointed out that we could not commit to finishing a specific set of tasks for that project since priorities at the beginning of the sprint were not fixed for the following two weeks (which is essential for carrying out a sprint effectively, as it allows the team to stay focused on a stable goal instead of having to shift gears often).

We decided that the best way to handle uncertain priorities was to divide the whiteboard into horizontal rows (or swimlanes), each with its own rules and expectations:

All of the team’s projects are now represented with tickets that map to distinct user stories, tasks, and bugs in one central place, giving the team full visibility into the work being done during the sprint, without committing to work that is likely to fall in priority.

Where we are now

The team continues to work out the kinks of using a physical board, such as overlooking details that are included only in the issue trackers, needing to be physically in the team room to know what to work on next, updating tickets only once a day during standup, and sticky notes falling off the board when the room gets too hot.

We have also observed some distinct benefits to leaving JIRA behind:

I don’t know if the team will continue to use the whiteboard, if they will choose to go back to using JIRA’s sprint board, or if they will come up with some other solution; but as their Scrum Master, I have appreciated the journey, the team’s willingness to experiment and try new things, and their creativity in overcoming the challenges they encountered.

We didn’t always use Scrum at Caktus - check out this blog post to learn how we got started.