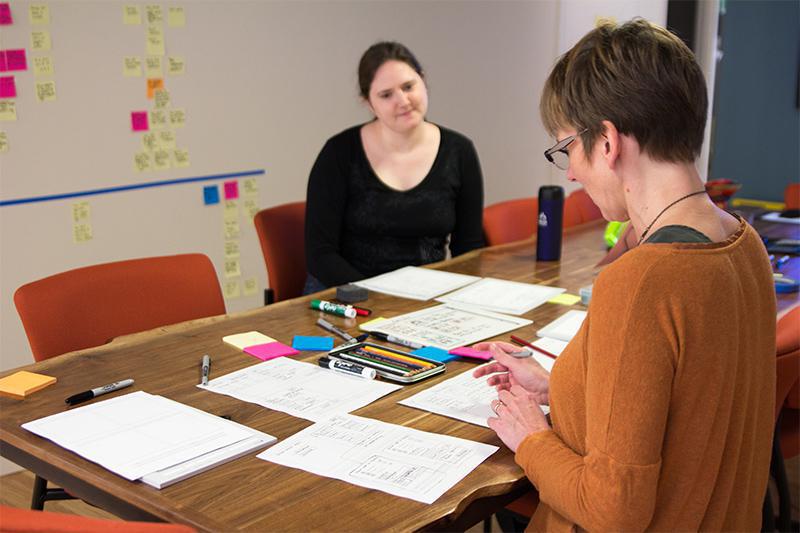 This ShipIt day marks four years of ShipIt days at Caktus! We had a wide range of projects that people came together to build. Most importantly, we all had fun and learned through actively working on the projects. People explored new technologies and tools, and had a chance to dig a bit deeper into items that piqued their interest in their regular work.

Calvin did some work inspired by a client project to create tools for working with React’s JSX DOM manipulation within Django projects. This bridge allows embedding of JSX in Django templates (even using Django template language syntax) to be compiled and then rendered on the page. Calvin released django-jsx up on Github and pypi, and is interested in feedback from people who use it.

Dmitriy continued working on the TinyPNG compressed Django ImageField from the previous ShipIt Day. He’s shared his updates through the Github repository django_tinypng. This time Dmitriy worked on cleaning up the project in preparation for possibly submitting it to pypi. His work included adding documentation and a nice way to migrate pre-existing image fields in projects to the new compressed image field.

Dan explored the asyncio capabilities of Python 3 via a long standing project of his. He had a previous project to control displaying videos. Issues came up when the player would lose connectivity and Dan wanted his program to be able to dynamically recover. Dan dug into the asyncio documentation head first, but was a bit overwhelmed by the scope of the library. Luckily, he found an excellent write up by Doug Hellmann in his Python Module of the Week series. Dan used what he learned to build an event loop, and focused on making his project more resilient to handle errors gracefully.

Mark created a set of microservices working together including a worker, a web server to handle webhook requests, a web hook generator, and a logging server. These services communicated together using rabbitmq and asyncio. The work that Mark did on this was a fun but relevant diversion from his prep for his upcoming All Things Open talk next week on RabbitMQ and the Advanced Message Queueing Protocol.

David worked with Microsoft Azure and compared it with our standard provisioning and deployment practices. He learned about how configuration and management tools around Azure compare to those of other cloud providers. As a test case, David built a test application using our SaltStack based django-project-template and worked on getting the test application up and running to identify any pain points.

Neil shared with the team his explorations into using Elixir. Elixir is a functional language built on top of Erlang’s virtual machine (VM), but without some of the peculiarities of the older Erlang language. The Erlang VM was developed with extreme fault tolerance in mind for creating telecom software (eg. the electronic phone switching system) that would never go down and could even be upgraded without downtime. Neil delved into this high availability mindset by creating a test project with worker processes handling data storage and supervisor processes in place to restart failed worker processes. Overall, Neil found the exploration useful in that understanding a wide range of programming language paradigms helps you to think through challenges in any language, in different ways.

Rebecca and Alex both worked on updating or adding front-end tests to projects via Selenium. Rebecca looked at updating the tests in django-scribbler in preparation of an upgrade of the open source project to support Django 1.10. Alex looked into using information from Mark Lavin’s 2015 DjangoCon talk on front-end testing and amazing documentation to add front-end tests to an existing project.

Charlotte F., Liza, and Sarah facilitated Caktus team members taking an implicit bias test from Harvard’s Project Implicit. Caktus team members participated by taking the test and anonymously shared their results. Charlotte and Liza reviewed the responses and compared them to the average responses for all project implicit respondents. This was a great way for team members to examine and become aware of implicit biases that may arise when interacting with people inside and outside of Caktus.

Sarah worked on a new tool for forecasting team availability via a tool that uses project schedules in their native format so that they do not need to be reformatted for forecasting. In working on this project, Sarah had a chance to learn some new spreadsheet creation tools and practice laying out a sheet in a way that can be sustainably maintained.

Charlotte M. and Basia Coulter invited everyone at Caktus to participate as clients would in a UX discovery workshop. Alley Cats and Angels is a local animal rescue that Caktus is particularly fond of. Alley Cats and Angels has an internal database to track information about cats getting enrolled in its programs, foster homes, adoption applications, adopters etc. It also has a public-facing website where its programs are described and relevant application forms can be submitted, and where cats available for adoption are featured. But there is no automated communication between the database and the public-facing website, and not all important information is being tracked in the database. That results in significant overhead of manual processes required to keep all information in order, and to facilitate programs. Using a story mapping technique, Charlotte and Basia worked with Caktii to map out a web-based application that would allow for an integration of the internal database and the public-website, automation of critical processes, and more complete information tracking. They identified important user flows and functionality, and broke them down into individual user stories, effectively creating a backlog of tasks that could be prioritized and leveraged in a sprint-based development process. They also determined which features were necessary for the first iteration of the application to deliver client value. By doing so, they defined a version of the minimum viable product for the application. At the end of the workshop they took some time to sketch paper prototypes of selected features and screens. The result of the workshop was a comprehensive set of deliverables (user flows, backlog of user stories, minimum viable product, and paper prototypes) that could serve as starting point for application development.