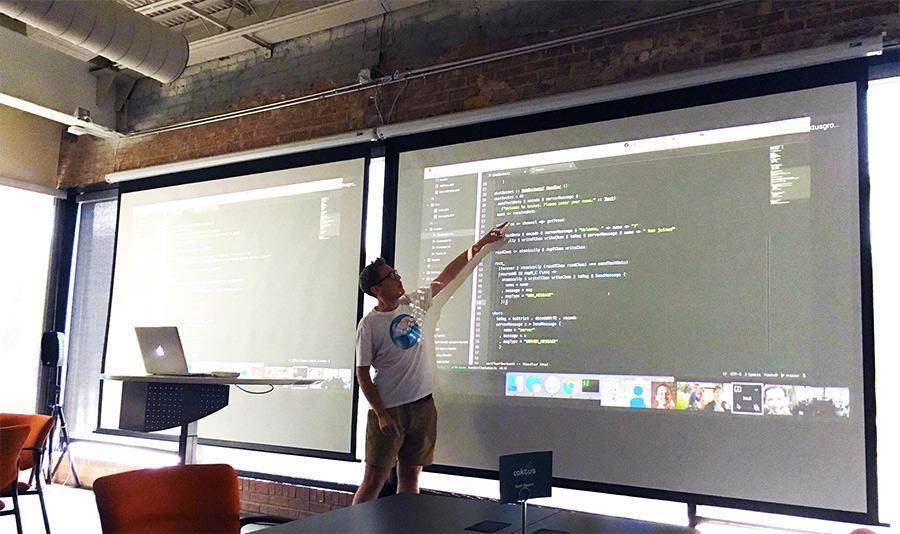 We finished up last week with another successful ShipIt Day. ShipIt Days are quarterly events where we put down client work for a little bit and focus on learning, stretching ourselves, and sharing. Everyone chooses to work together or individually on an itch or a project that has been on the back of their mind for the last few months. This time, we stretched ourselves by trying out new frameworks, languages, and pluggable apps. Here are some of the projects we worked on during ShipIt Day:

Kia and Dmitriy started on django_tinypng. This project creates a new OptimizedImageField in Django which uses the tinify client for the tinypng project to compress PNG files. This means that files uploaded by users can be reduced in size by up to 70% without perceivable differences in image quality. Reducing image sizes can free up disk space on servers and improve page load speeds, significantly improving user experiences.

Rebecca Muraya researched how we, as developers, can consistently manage our requirements files. In particular, she was looking for a way to handle second-level (and below) dependencies -- should these be explicitly pinned, or not? Rebecca did some research and found the pip-tools package as a possible solution and presented it to the group. Rebecca described pip-tools as a requirements file compiler which gives you the flexibility to describe your requirements at the level that makes sense to your development team, but have them consistently managed across development, testing, and production environments. Rebecca presented ideas for integrating pip-tools into our standard development workflows.

Neil and Dan each independently decided to build projects using Elm, a functional language for frontend programming.They were excited to demonstrate how they rearranged their concept of development temporarily to focus on state and state changes in data structures. And then, how these state changes would be drawn on the screen dynamically. Dan mentioned missing HTML templates, the norm in languages where everything is not a function, but loved that it forced programmers to handle all cases as a result of the strict type system (unlike Python). Neil dug not only into Elm on the frontend, but also a functional backend framework Yesod and the Haskell language. Neil built a chat app using Websockets and Yesod channels.

Hunter built a bill tracking project using Google’s Firebase database and the React frontend framework. Hunter walked us through his change in thought process from writing code as a workflow to writing code that changes state and code that updates the drawing of the state. It was great to see the Firebase development tools and learn a bit more about React.

Rebecca Conley worked on learning some new things about database routing and some of the statistics that go into the Open Data Policing project. She also engaged Caelan, Calvin’s son who was in the office during the day, to build a demonstration of what she had been working on.

DXR is a web-based code indexing and searching tool built by Mozilla. For his project, Jeff Bradberry decided to create a pull request contribution to the project that improves Python code indexing. Specifically, he used Python’s own Abstract Syntax Tree (AST), a way to introspect and consider Python code as structured data to be analyzed. Jeff’s contribution improves the analysis of nested calls like a(b(c())) and chained calls like a().b().c().

Hatrack: We all wear lots of hats, switch contexts easily

Rather than working on something completely new, Calvin decided to package up and share a project he has been working off-and-on in his free time called Hatrack. Hatrack attempts to solve a problem that web developers frequently face: changing projects regularly means switching development environments and running lots of local development web servers. Hatrack notices what projects you try to load up in your browser and starts up the development server automatically. For his project, Calvin put Hatrack up on NPM and shared it with the world. You can also check out the Hatrack source code on Github.

Sometimes ShipIt Day can be a chance to read or review documentation. Charlotte went this route and reviewed the requirements for the International Software Testing Qualifications Board (ISTQB)’s certification programs. Charlotte narrowed down on a relevant certification and began reviewing the study materials. She came back to the group and walked us through some QA best practices including ISTQB’s seven principles of software testing.

Sarah began work to visualize project teams’ cross-functional specialties with an eye towards finding skill gaps. She built out a sample questionnaire for the teams and a method of visualizing the skill ranges in specific areas on a team. This could be used in the future when team members move between teams and for long-term planning.