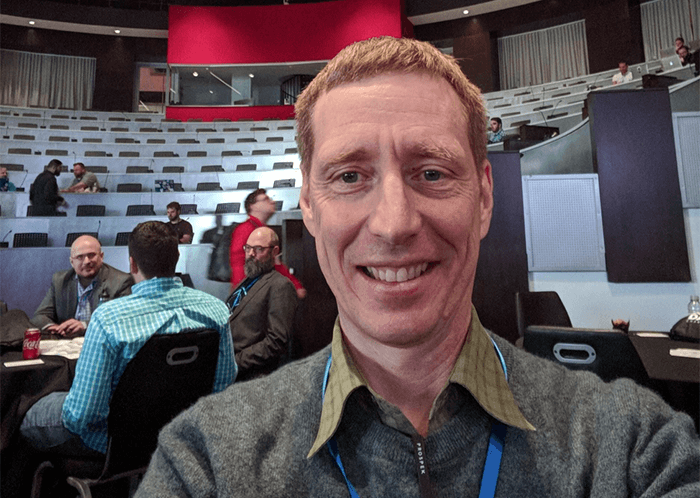 We have a small two-person Infrastructure Ops team here at Caktus (including myself) so I was excited to go to my first devopsdays Charlotte and be surrounded by Ops people. The event was held just outside of Charlotte, at the Red Ventures auditorium in Indian Land, South Carolina. About 200 people gathered there for two days of talks and open sessions. Devopsdays are held multiple times a year, in various locations around the world. Check out their schedule to see if there will be an event near you.

On Thursday afternoon, Quintessence Anx gave an awesome technical Ignite talk on Sensory Friendly Monitoring. She packed a whole lot of monitoring wisdom into 5 minutes and 20 slides, so I was then looking forward to what she had to say about diversity. She spoke on Unquantified Serendipity: Diversity in Development, and it ended up being my favorite talk. 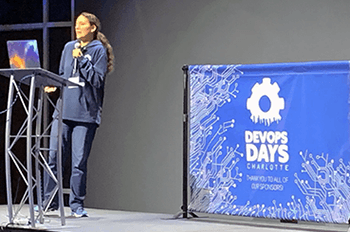 Quintessence (pictured right) provided a lot of actionable information and answered many common concerns that people have with diversity. She told the story of how as a junior developer her mentors often told her how to solve problems, while they told her male peers how to find answers. She suggested that mentors give a “hand up, not a hand out” and stressed the importance of being introduced to a mentors network so that the mentee can start building their own networks. I thought that the talk had the right balance between urgency and applicability.

View her slides and a mind map of an earlier version of the talk.

The Friday Keynote was given by Sonja Gupta and Corey Quinn, and was titled Embarrassingly Large Numbers: Salary Negotiation for Humans. It focused on how to upgrade your income by getting a new job. This talk was informative and entertaining, including more f-bombs than all the other presentations combined. Some of the points they made were:

They also recognized that negotiation is hard, but you are not rude if you ask for what you’re worth. I was looking forward to this keynote since I recently began following Corey’s newsletter, Last Week in AWS, where he has elevated snark to an art form.

I enjoyed the event, and I am looking forward to attending devopsdays Raleigh in the fall. The next devopsdays Charlotte will take place in 2020.