Django or Drupal for Content Management: Which Fits your Needs? 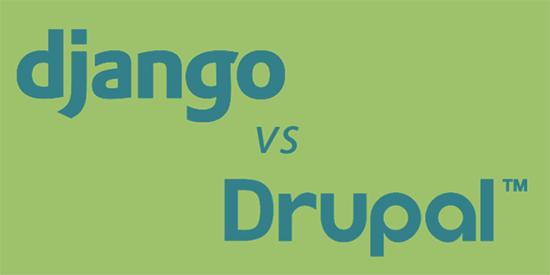 If you’re building or updating a website, you’re probably wondering about which content management system (CMS) to use. A CMS helps users — particularly non-technical users — to add pages and blog posts, embed videos and images, and incorporate other content into their site.

You could go with something quick and do-it-yourself, like WordPress (read more about WordPress) or a drag-and-drop builder like Squarespace. If you need greater functionality, like user account management or asset tracking, or if you’re concerned about security and extensibility, you’ll need a more robust CMS. That means using a framework to build a complex website that can manage large volumes of data and content.

Put simply, a framework is a library of reusable code that is easily edited by a web developer to produce custom products more quickly than coding everything from scratch.

Django and Drupal are both frameworks with dedicated functionality for content management, but there is a key difference between them:

The separation that Django provides makes it easier for content managers to use the CMS because they don’t have to tinker with the technical aspects of the framework. A popular combination is Django and Wagtail, which is our favorite CMS.

Drupal is open source and built with PHP programming language. For some applications, its customizable templates and quick integrations make it a solid choice. It’s commonly used in higher education settings, among others.

However, Drupal’s predefined templates and plugins can also be its weakness: while they are useful for building a basic site, they are limiting if you want to scale the application. You’ll quickly run into challenges attempting to extend the basic functionality, including adding custom integrations and nonstandard data models.

What does the above mean for non-technical stakeholders? Development processes are slowed down significantly because developers have to pass massive database files back and forth with low visibility into the changes made by other team members. It also means there is an increased likelihood that errors will reach the public version of your website, creating even more work to fix them.

Django is used by complex, high-profile websites, including Instagram, Pinterest, and Eventbrite. It’s written in the powerful, open-source Python programming language, which was created specifically to speed up the process of web development. It’s fast, secure, scalable, and intended for use with database-driven web applications.

A huge benefit of Django is more control over customization, plus data can easily be converted. Since it’s built on Python, Django uses a paradigm called object-oriented programming, which makes it easier to manage and manipulate data, troubleshoot errors, and re-use code. It’s also easier for developers to see where changes have been made in the code, simplifying the process of updating the application after it goes live.

How to choose the right tool

Consider the following factors when choosing between Drupal and Django:

Need for customization: If your organization has specific, niche features or functionality that require custom development — for example, data types specific to a library, university, or scientific application — Django is the way to go. It requires more up-front development than template-driven Drupal but allows greater flexibility and customization. Drupal is a good choice if you’re happy to use templates to build your website and don’t need customization.

Internal capacity: Drupal’s steep learning curve means that it may take some time for content managers to get up to speed. In comparison, we’ve run training workshops that get content management teams up and running on Django-based Wagtail in only a day or two. Wagtail’s intuitive user interface makes it easier to manage regular content updates, and the level of customization afforded by Django means the user interface can be developed in a way that feels intuitive to users.

Planning for future updates: Future growth and development should be taken into account when planning a web project. The choices made during the initial project phase will impact the time, expense, and difficulty of future development. As mentioned, Drupal has backwards compatibility challenges, and therefore a web project envisioned as fast-paced and open to frequent updates will benefit from a custom Django solution.

Don’t just take our word for it. Here’s what Brad Busenius at the University of Chicago says about their Django solution:

"[It impacts] the speed and ease at which we can create highly custom interfaces, page types, etc. Instead of trying to bend a general system like Drupal to fit our specific needs, we're able to easily build exactly what we want without any additional overhead. Also, since we're often understaffed, the fact that it's a developer-friendly system helps us a lot. Wagtail has been a very positive experience so far."

Deciding between Django and Drupal comes down to your specific needs and goals, and it’s worth considering the options. That said, based on our 10+ years of experience developing custom websites and web applications, we almost always recommend Django with Wagtail because it’s:

If you want to consider Django and whether it will suit your next project, we’d be happy to talk it through and share some advice. Get in touch with us.