I attended the TriAgile conference in Raleigh, NC on March 30th, 2017 and wanted to share some takeaways from a couple of the talks I saw. Overall, the conference was a nice opportunity to network with some local Agilists and hear about their work and experiences. It was well organized, and I was pleasantly surprised by the size of the Agile community in the Triangle!

The Power of an Agile Mindset

Linda Rising’s keynote talk, "The Power of an Agile Mindset" addressed the differences between fixed versus growth mindsets and how that relates to Agile. She began by outlining an experiment in which students were split into “growth” and “fixed” groups after being given an easy set of questions. Later presented with a series of choices, the fixed group students chose easier tests, felt easily discouraged, showed decreased performance, and lied about their test scores. The growth group students, however, chose more challenging tests, worked hard, enjoyed the challenges, wanted to see tests of students who did better than them, and showed improved performance. (See Mindset by Carol Dweck for further reading on this experiment.)

When boiled down, the fixed mindset views ability as a static attribute that cannot be changed or improved (like height), avoids challenges, is defined by failure, sees effort as being for those who have no talent, and reacts with helplessness in the face of challenge. The growth mindset, or Agile mindset, views ability as an attribute that can be exercised and grown like a muscle, wants to learn, embraces challenge, learns from and is resilient to failure, and recognizes effort as the path to mastery.

When put into the context of an organization, a fixed mindset results in companies who hire only “the best talent” and then continuously fire the lowest performing employees (a practice called “rank and yank”). Growth mindset companies hire based on attitude, focusing on growing their employees, providing learning opportunities, and establishing a culture of trust.

Mindset is important in the practice of Agile at all levels of an organization, from management, to the teams, to the individuals. A fixed mindset can grow to become an Agile mindset through feedback and experimental manipulations (sound familiar?). Rising offered some practical advice for how to reach an Agile mindset, such as praising effort, practice, strategy, and process rather than talent or innate abilities, and encouraging making mistakes and learning from failure rather than punishing or ignoring it.

I found this talk inspiring, and was proud to see that Caktus squarely aligns with the characteristics of the growth mindset companies. Agile is a journey, not a destination: in the end, “reaching the Agile mindset” is not about attaining some nebulous end goal, and more about valuing the process of learning and growing along the way.

The Stances of Coaching

The talk that was most relevant to my role as ScrumMaster was “The Stances of Coaching” by AgileBill Krebs. Krebs’ talk was an introduction to the four “stances” that an Agile Coach must learn to consciously adopt depending on the situation at hand. They are: 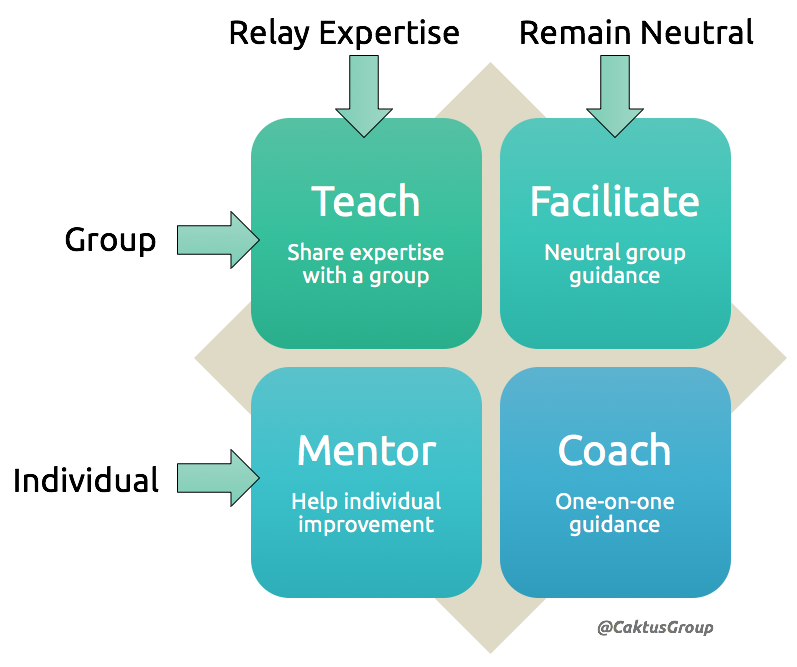 The most practical advice that I took away from this talk was to ask powerful questions that are open rather than leading, not stacking questions (asking one at a time and giving the person or group a chance to answer), and getting comfortable with silence. Consciously switching stances can be challenging, but knowing which stance is appropriate will get you halfway there.

Some of the other talks I saw were:

The variety of talks at TriAgile meant there was something on offer for anyone working in an Agile environment. I was tempted to simply follow the Coaching track, but I am glad to have deviated from it in order to see some of the talks that were less directly relevant to my role. I will certainly return for TriAgile 2018, where I also hope to see more pre-conference workshops available.