Several national publications have featured the Florida Open Debate platform, including USA Today, Engadget, and The Atlantic. Caktus helped develop the Django-based platform on behalf of the Open Debate Coalition (ODC) in advance of the nation’s first-ever open Senate debate held in Florida on April 25th. The site enabled citizens to submit debate questions as well as vote on which questions mattered most to them. Moderators then used the thirty most popular questions from the site to structure the debate between Florida Senate candidates David Jolly (R) and Alan Grayson (D). According to The Atlantic, more than 400,000 votes were submitted by users on the site, including more than 84,000 from Florida voters. 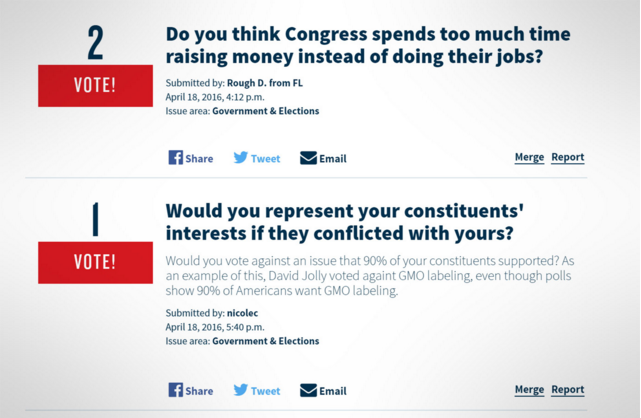 “Normally, the press frames important US election debates by choosing the questions and controlling the video broadcast,” wrote Steve Dent. “For the first time, however, the public... decide[d] the agenda.”

In his article for The Atlantic, Russell Berman also applauded the site’s effort “to make bottom-up, user-generated questions the centerpiece of a debate.” But possibly more significant were the results of this crowd-sourced content. “What transpired was, by all accounts, a decent debate,” Berman writes. “For 75 minutes, Grayson and Jolly addressed several weighty policy disputes—money in politics, Wall Street reform, the minimum wage, climate change, the solvency of Social Security—and often in detail.”

The Florida debate was streamed live on Monday to more than 80,000 viewers. The Open Debate platform is receiving attention and interest from various potential debate sponsors as well as the Commission on Presidential Debates for possible use in the in this fall’s presidential elections.

How to Decouple Your App From its Operating System with Docker